Brushes with the paranormal can, and do happen in every imaginable setting. In our forests, on our roads, in our homes, and probably the most disturbing, in our bedrooms.

It can happen anywhere, at any time, but there is certain landmarks that tend to attract higher levels of activity than the baseline of other locations. Such landmarks include, but are not limited to: bridges, railways, military-installations, bodies of water, burial and effigy mounds, and crossroads.

While each of these areas can, and do spark their own theories as to what makes these places supranatural hotbeds—at this time, let us focus on the latter, and leave the rest for a time each can be explored in the detail they deserve.

Crossroads have a long and storied history in the annals of supernatural lore. Exercutions, and subsequent burial of the condemned, as well as burial of those that had committed suicide, often took place at crossroads. The belief being that their restless spirits may be confused, and so not be able to return to aggress the living.

Perhaps this reasoning arose from belief in the occult significance of crossroads; that being, they are the intersection of: paths, ideas, and worlds, and they represent, decision, indecision, and confusion.

These ideas are not regulated to superstition of the past, but are alive to this day in a number of pop-cultural references. One such instance is that of the legendary blues artist Robert Johnson, who it is said made a Faustian bargain for mastery of the guitar. The sight of his contract signing, the intersection of Hwy 49 and 61, in Rosedale, MS. Whether or not Mr. Johnson made such a bargain, only he and “Ol Scritch” could say with any authority. Nevertheless it as been referenced numerous times in musical and dramatic portrayals, assuring the crossroads will remain “a place of power” in humanity’s collective subconscious for years to come.

To be Seen or Not to be Seen

sense, the same should not hold true in the world of cryptid creatures. Yet, this does seem to be the case, but why?

In the cryptid world, let us take for instance the currently in vogue Dogman. These creatures are reputed to be the ultimate apex predators, yet they are spotted by motorists at an inordinate rate, and not surprisingly at crossroads.

Predators do not like to be seen, so one would logically think a creature with honed predatory senses, and with above animalistic intelligence, (if not telepathic abilities) would be more than capable of remaining unseen. That is unless being witnessed is not a concern, but may in fact be the desired.

In quantum field theory the role of the observer is a place of fundamental importance in weaving the fabric of reality.

Lacking the expertise or the desire to do so, we will refrain from going into great detail with the theory, suffice it say, it appears observation affects the material-world, if only on the smallest (for now) scales (see the double slit experiment). Does this explain the “feeling of being watched”, one has to wonder. It also begs the question, is the purpose of paranormal encounters, in fact to be observed?

William Francis “Slick Willie” Sutton, a prolific 20th century American bank robber, is attributed as saying, when asked by a reporter why he robbed banks, “Because that’s where the money is”. In this vein, perhaps experiences happen in these areas because, that “is where the people are” more often. These entities desire to be observed, and in so doing, some type of subtle quantum energy/information is transferred giving them realization, or existence in the material world.

It has been theorized that some paranormal entities feed off the fear generated in persons that encounter them. Perhaps only certain types of entities need or desire the energy generated by fear, and some portion of energy is obtained whenever observation occurs regardless of the emotional response. It may be as simple as, to exist, it they must be observed. 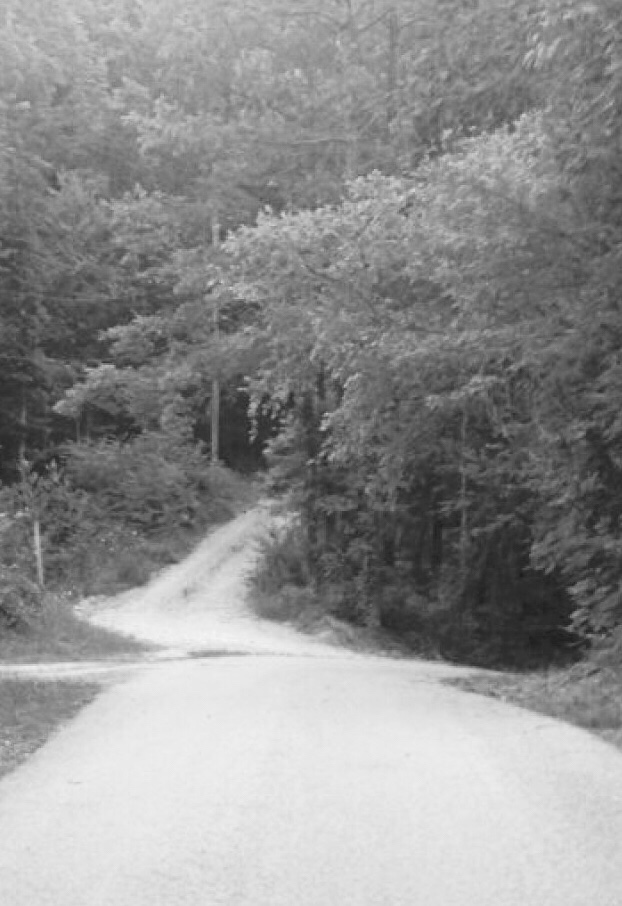 I was about six years old when it happened. My father, sister, and I were in the front yard one day playing baseball, as well as could be played with players varying in age from mid-thirties(father), mid-teens, (sister) and myself (around six) when it happened.

I had gotten a new, full-size (MLB) wooden bat for my recent birthday, a grossly oversized piece of equipment for my age, but that didn’t prevent my father from getting it for me because he, like so many other fathers, had the great American dream of his son playing in the major-leagues someday.

At any rate, for some trivial reason or another, I can’t remember exactly, I started being an insufferable brat. I got mad at something during play and actually pulled the “I’ll take my ball and go home” expression with the exception, it was a bat instead of ball, and I was already home. I retreated to the side-yard, leaving them in the front-yard, where their game continued on.

There I was with my bat, stewing in whatever real or imagined slight I had suffered, when I heard my name being called. The voice was coming from a small, man-sized opening to the crawlspace from beneath our house. At first, and for a few moments thereafter, I thought it was my sister trying to egg-me-on. I thought it vaguely sounded like her. I ignored it at first, but it continued saying, “Kelly, come under here.” It repeated over and over.

I had enough, and still being fairly certain it was my sister I said, “Geneva, you better stop messing with me.” To this the voice responded, “I’m not Geneva, come under here”.

When first I heard it, I was twenty-feet or so away from the crawlspace opening, and after first engaging it, I had been inching closer. I keep repeating, “Geneva, you better stop, I mean it”. The voice kept denying it was Geneva, and beckoning me to “come under here”.

I loved my sister, and she me, but there was sibling conflict, regardless of there being a gap of several years between our ages, so pulling a prank such as this was well within the realm of possibility.

I inched closer, and I was not afraid. I was however getting angry thinking she was being particularly relentless in this “joke”. Still the voice said, “Come under here”. So I said, “No, you come out here”, while cocking back my bat behind my head, storing up all the potential energy my six-year-old arms could muster.

The exchange went on for a few moments more, until it became apparent neither side was willing to compromise. I was certainly not, “coming under there”, and “it” wasn’t “coming out here”, so the dialogue ended.

I am ashamed to admit this now, but had “it” showed its head through the crawlspace opening, whatever it was, sister or no, it would have tasted every ounce of hickory I could have brought to bear.

Still provoked by anger mainly, but by then fear had certainly gained ground. I decided I had enough “alone” time and decided to go back to the front-yard. I was fairly certain I would be greeted with laughs and teasing from my father and sister, but none came. I surveyed their demeanor closely; hoping for some hint that it had been a prank, there was none. I went and sat on the front porch for a few moments replaying my experience. I then rejoined the game.

I never mentioned this to anyone for well over twenty years, then one day the family conversion happened to turn to the “paranormal”, so I decided to ask the only other person at home that day, that being my mother. She told me it was not her. My sister also steadfastly denied it. Now for a person reading this, there is certainly the possibility that one or both was lying, and while I would be 99% sure of the truthfulness of my sister, I am 100% certain my mother would never lie to me, especially when asked about such a thing. This woman was and is the epitome of Christianity. A mother who never told her children there was a Santa Claus because, she “wasn’t going to tell her children lies”, and “that our father worked hard to make a living for us and no bearded fat-man in a red suit was going to get the credit”. You would just have to know her.
So there is my conversation with the “unknown”. Take from it what you will.